Below is a basic airplane design. 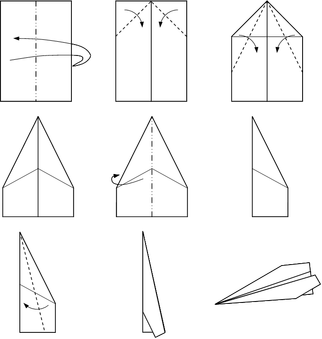 Aerodynamics General aerodynamics Paper aircraft are a class of model plane, and so do not experience aerodynamic forces differently from other types of flying model. However, their construction material produces a number of dissimilar effects on flight performance in comparison with aircraft built from different materials.

In general, there are four aerodynamic forces that act on the paper aircraft while it is in flight:

Altogether, the aerodynamic forces co-interact, creating turbulence that amplifies small changes in the surface of the paper aircraft. Modifications can be made to most paper airplanes by bending, curving or making small cuts in the trailing edges of wings and in the airplane's tail, if it has one.

Main article: Roll, pitch, and yaw The most common adjustments, modelled after glider aircraft, are ailerons, elevators, and rudders.

Critical Re The Reynolds number range of the paper model aircraft is reasonably wide:

These ranges are indicative. As noted above the mass:density ratio of paper prevents performance from reaching those of Balsa models in terms of expressions of power to weight, but for models with wingspans of between 250 mm and 1,200 mm, the Critical Re is very similar to balsa model gliders of similar dimensions.

Paper models typically have a wing aspect ratio that is very high (model sailplanes) or very low (the classic paper dart), and therefore are in almost all cases flying at velocities far below their wing planform and aerofoil Critical Re, where flow would break down from laminar to turbulent.

Most origami paper darts tend to be flying within turbulent air in any case, and as such, are important to research into turbulent flow as are low-Re lifting surfaces found in nature such as leaves of trees and plants as well as the wings of insects.

High performance profile and scale models do approach their wing section's critical Re in flight, which is a noteworthy achievement in terms of paper model design. Performance is derived of the fact that wings of these gliders are in fact performing as well as it is possible for them to perform, given their material limitations.

Experiments in different material finishes in recent years have revealed some interesting relationships in Re and paper models. Performance of origami and compound origami structures improves markedly with the introduction of smooth paper, though this is also aided by the paper's higher mass and consequently better penetration.

More marginal performance and scale types generally do not benefit from heavier, shinier surfaces. Performance profile-fuselage types do experience somewhat improved performance if shiny, slippery paper is used in construction, but although there is a velocity improvement, this is offset very often by a poorer l/d ratio. Scale types have experience negative performance at the addition of heavy shiny papers in their construction.

Aerofoils Wing profile sections in models vary, depending on type:

Camber of profiles varies, too. In general, the lower the Re, the greater the camber. Origami types will have 'ludicrous' or very high cambers in comparison with more marginally performing scale types, whose escalating masses demand higher flying speeds and so lower induced drag from high camber, though this will vary depending on type being modelled.

In the case of scale performance and scale models, the modellers intent will define the type of aerofoil section chosen. WWI biplanes, if designed for flight performance, will often have curved-plate aerofoils, as these produce a highly cambered surfaces and Coefficient of Lift (Cl) for low gliding airspeeds. WWII monoplanes will often have very scale-like sections, though with increased trailing edge droop to improve camber in comparison with scale counterparts.

Similarly, size, airspeed and mass will have very big impacts on choice of aerofoil, though this is a universal consideration in model plane design, no matter the material.

Origami Flying Wings The former Guinness world record holder Tim Richardson disagrees with the decision to put a 'tail' on the paper plane. His explanation of paper plane aerodynamics on his website mentions that the tail is not needed. He uses the real-life B-2 Spirit flying wing bomber as an example, stating that the weights along the wing should be put forward in order to stabilize the plane. (Note: paper planes do not need a tail primarily because they typically have a large, thin fuselage, which acts to prevent yaw, and wings along the entire length, which prevents pitch.)

Independently, Edmond Hui invented a Stealth Bomber-like paper plane called the Paperang in 1977,[6] based on hang glider aerodynamics. Uniquely, it has properly controlled airfoil sections, high aspect ratio wings, and a construction method designed to allow the builder to vary every aspect of its shape. It was the subject of a book, "Amazing Paper Airplanes" in 1987, and a number of newspaper articles in 1992. It is ineligible for most paper plane competitions due to the use of a staple, but it has extremely high gliding performance exceeding glide ratios of 12 to 1 with good stability.

In 1975, origami artist Michael LaFosse designed a pure origami (one sheet; no cutting, glue or staples...) flying wing, which he named the "Art Deco Wing".

Though its aerodynamic form mimics some hang glider and supersonic airfoils, its invention evolved from exploring the beauty of folded paper first. Its glide ratio and stability are on a par with many of the best paper wing constructions that use glue, tape or staples. This design was first published in 1984 in the book "Wings and Things", by Stephen Weiss, St. Martin's Press.

Although it is a common view that light paper planes go farther than heavy ones, this is considered to be untrue by Blackburn. Blackburn's record-breaking 20-year-old paper plane[7] was based on his belief that the best planes had short wings and are "heavy" at the point of the launch phase in which the thrower throws the paper plane into the air, and at the same time longer wings and a "lighter" weight would allow the paper plane to have better flight times but this cannot be thrown hard with much pressure into the air as a "heavy" weighted launch phase. According to Blackburn, "For maximum height and for a good transition to gliding flight, the throw must be within 10 degrees of vertical" — which shows that a speed of at least 60 miles per hour (about 100 kilometers per hour) is the amount needed to throw the paper plane successfully.

After the folding there are still gaps between different layers of folded paper (tearoff edge). These and the kinks transversal to the airflow may have a detrimental effect on aerodynamics, especially on the upper side of the wing. In some models the surfaces are not aligned to the direction of flow acting as airbrakes. Typically the center of mass is at 1/81 and the center of area is at 1/2 of the plane lengths. Two methods exist to shift the center of mass to the front. One rolls up the leading edge which then stays unswept. The other uses a swept wing or axial folding to produce something like a fuselage extending out of leading edge of the wing.

Other designs An example of an asymmetrical custom paper airplane, which exhibits large torque due to unbalanced forces on the wings. The flight path assumes a somewhat parabolic shape, before descending in a rapid counter-clockwise spiral, as viewed from behind. It is possible to create freestyle versions of paper aircraft, which often exhibit an unusual flight path compared to more traditional paper darts, jets and gliders. Another propulsion technique, creating high launch velocities, involves the use of elastic bands for "catapults". Walkalong gliding involves the continuous propulsion of paper airplane designs (such as the tumblewing, follow foil[8] and paper airplane surfer[9]) by soaring flight on the edge of a sheet of cardboard.